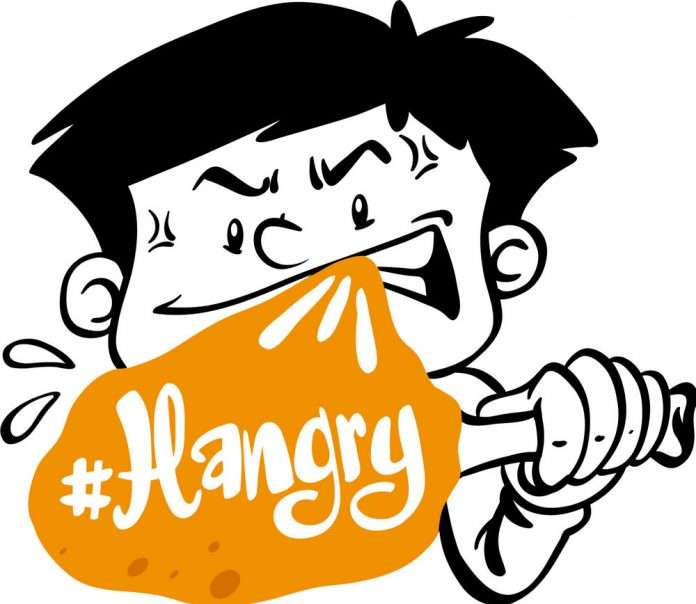 Have you ever noticed that when you are hungry, you are especially prone to lose your temper? What is the relationship between hunger and anger?

People commonly feel an uptick in anger or aggression when they are hungry, says Dr. Brad Bushman, a professor of psychology at Ohio State University. “The brain needs fuel to regulate emotions, and anger is the emotion people have the most difficulty regulating,” he explains.【1】

Hangry was also added to the Oxford dictionary. The adjective is defined as, quote, “bad-tempered or irritable as a result of hunger.” 【2】

2. The link between “hungry” and “angry”

2.1 The relationship between the brain and the stomach

The nerves in the brain and stomach are usually connected. However, the stomach also has its nerve center. If a person experiences hunger and satiety, it is usually transmitted to the nerves of the brain. If there is emotional anxiety or depression in the brain, it may directly affect the stomach.

2.2 The effect of the state of the stomach on the brain

Likewise, the nervous system in our gut is self-contained. It’s not entirely under the control of the brain. Our central nervous system is also just for generating all kinds of psychology. Therefore, the brain has only a certain influence on the reproductive system of the stomach.

Of course, gastrointestinal movements can also affect our mood changes. Because the stomach is our second brain, it will send us happiness and other messages.

The gastrointestinal tract is not only involved in digesting food, it also participates in the functional regulation of other organs in the body, including human emotional changes. For example, a person likes spicy food very much. When he eats spicy food, the stomach will notify the brain to generate excitement.

2.3 Why do some people feel out of control when they are hungry?

Researchers believe that glucose is to the brain what fuel is to the engine. With less fuel, it is more difficult for the brain to maintain normal function.

Negative emotions such as anger and anxiety are usually controlled by the “brain limbic system”. When the energy supply is insufficient, the limbic system cannot function properly. As a result, the brain’s ability to control emotions and behavior is diminished.

The kidneys are also involved in this process. It synthesizes a lot of “norepinephrine” and “cortisol”. These are two hormones that people release when they are stressed. Norepinephrine raises blood pressure, and cortisol is the infamous “stress hormone.”

The secretion of all three hormones can make people more prone to anger and more aggressive.

Scientists have long noticed a subtle link between hunger and mood.

An interesting study was published in the Proceedings of the National Academy of Sciences (PNAS). The researchers recruited 107 couples to participate in the 21-day experiment. Everyone got a voodoo doll and lots of pins.

Each night, the couples decide how many needles to put into the voodoo doll, based on how angry they are with their partner throughout the day.

At the same time, the researchers recorded their hunger levels by measuring the glucose levels in their blood.

The results showed that the lower the blood sugar levels of the participants, the more needles they poked into the voodoo doll, and the more likely they were to provoke each other. The link persisted even when the researchers factored in the couple’s relationship satisfaction.

Nathan DeWall, a psychology professor at Kennedy University, is one of the researchers in the experiment. He believes that when people go hungry, energy begins to run out of supply. However, both self-control and impulse control require physical and mental energy.

3. Other consequences related to over hunger

If you are over hungry, you’ll feel drained and lethargic. This condition is due to a feeling of fatigue caused by a lack of energy in the body. This may also be due to electrolyte disturbances after starvation. Especially after the occurrence of hypokalemia or hyponatremia, the symptoms of general fatigue will be more obvious.

Sometimes people may experience low blood sugar due to starvation. Once hypoglycemia occurs, people will feel tired and weak. However, in addition to this feeling, people also experience heart palpitations and sweating. In severe cases, people can even go into a hypoglycemic coma.

Low blood sugar can cause symptoms of vertigo when people are hungry. Due to the reduction of blood sugar in the blood, ischemia, and hypoxia occur in brain cells, which in turn leads to brain nerve dysfunction and dizziness. Patients may also experience panic, sweating, or even outright syncope.

When you feel dizzy because of excessive hunger, the most important thing is to eat. You’d better eat foods that can be digested and absorbed quickly. For example, sweets or cakes and drinks can quickly increase a patient’s blood sugar. You’re best off eating a protein diet, such as eggs, because these foods are absorbed relatively slowly during periods of low blood sugar. After eating, your dizziness will be relieved.

When people are hungry, they may indeed experience symptoms of fatigue. If this hunger lasts longer, some people may experience confusion or even loss of consciousness, which seriously affects the normal operation of various organs.

In a state of starvation, the patient’s food intake may lead to insufficient sources of sugar, resulting in low blood sugar. However, low blood sugar will affect the energy supply of various organs, which will cause muscle tissue to become weak due to a lack of energy supply.

Likewise, excessive hunger may cause insufficient energy supply to the nervous system, resulting in changes in mental awareness. In severe cases, it may even cause a coma and be life-threatening.

Of course, sometimes we can’t tell the difference between hunger and thirst. If you’ve eaten enough food throughout the day, you’ll still want to snack, especially fruity snacks. Remember, this may be a signal from the body. You don’t need more food. It may just be a lack of water.

3.5 Confusion, or an inability to concentrate

Excessive hunger can lead to confusion. This may be due to malnutrition caused by chronic starvation, leading to a decline in the function of multiple organs throughout the body. In addition, this may also be due to the lack of blood supply and nutrition to the brain.

When you’re hungry, part of your focus is on finding food to satisfy your hunger. Moreover, due to starvation, there will be an insufficient supply of nutritional energy. However, thinking takes a lot of energy. Insufficient energy supply can negatively affect the efficiency of the brain to think about problems. Therefore, people will be unable to concentrate.

Excessive hunger can lead to indigestion. It may also be indigestion caused by gastrointestinal disturbances. This prolongs the emptying time of the stomach, which can lead to nausea and discomfort.

If you go hungry for a long time, you may get chronic gastritis. There will be physical fatigue, loss of appetite, abdominal pain, and other symptoms.

If this happens, seek medical attention immediately. At the same time, don’t overeat in your diet. Three meals should be regular.

4. What makes your hangry worse?

Have you ever found that staying up late at night makes you feel hungry? This may be due to staying up too late. Your body’s basal metabolism continues, but your body consumes more energy.

Studies have shown that staying up late will increase the consumption of vitamin C, vitamin E, and B vitamins. In addition, lack of sleep can affect appetite, resulting in a lower intake of vitamin A, calcium, and magnesium.

Nowadays, overtime has become the norm in society. Many working people have irregular eating habits. They often don’t eat on time. Sometimes they skip breakfast if they get up late in the morning. They may also work overtime at night and don’t have time to eat dinner.

This situation can easily exacerbate hangry. Because your body is constantly in a state of hunger, your emotions are hard to control.

4.3 Lack of exposure to sunlight

If you don’t get too much sun, you may exacerbate hangry. Foods contain very little vitamin D. Sun exposure is an important way to supplement vitamin D.

Therefore, if you go out early and return late every day, wear hats, and sunglasses, and apply sunscreen when you go out, you are prone to lack vitamin D.

A lack of vitamin D can lead to loss of appetite. Hangry can be exacerbated if you have a poor appetite and your body cannot take in energy properly.

Many people take unscientific methods to lose weight. They tend to go on a diet. Although this method works quickly, it can cause damage to the body.

People who lose weight control energy while reducing their intake of various micronutrients. Their bodies are often in a state of starvation, which makes hangry worse.

Choose high-fiber, low-fat foods. High-fiber foods, such as vegetables, fungi, fruits, whole grains, etc., are masters of eliminating hunger. They are also recognized as low-calorie foods. Foods high in fiber fill our stomachs. They give people a feeling of “support”, that is, a strong sense of satiety.

It’s also important to control your appetite and avoid high-fat foods, such as fried foods, cakes, burgers, and grilled meats.

Conversely, low-fat foods are low in fat and high in protein, making you feel fuller longer. Such foods include white meat such as fish, shrimp, chicken, or lean red meat.

Under normal circumstances, after a night of stomach digestion, the food in the human stomach is usually digested in the morning. Therefore, you can have breakfast before eight;

And dinner is best around 6:30 to 7:30. If the meal time is too late, it is necessary to wash and sleep before the food is digested. This is not good for health.

5.4 Plan For Meals and healthy Snacks When Your Schedule Might Interrupt Usual Mealtimes

Have a snack between meals. There are two times in the day when most people are more or less hungry. One is around 10:30 in the morning when the body’s metabolism becomes faster; the other is around 16:00 when the glucose content in the body has dropped.

During these two time periods, you can have snacks and choose some healthy snacks. The best snacks are low-energy, satiating foods such as milk, yogurt, soy milk, or nuts.

In addition, you can also eat a small amount of dried fruit, which is rich in fiber and minerals. It can help prevent hunger and control appetite.

5.5 Have the right dining order

Change the order of meals. The traditional order of meals is like fish, vegetables, main course, soup, dessert or fruit. Such an order is unhealthy and not good for appetite control.

It is best to follow the following meal order: drink soup → eat vegetables → eat protein → eat staple food. This eating sequence slows digestion, allowing nutrients to be released slowly and steadily until the food is absorbed in the end of the small intestine. Eating in this way makes it less likely to be hungry after the same meal.

Here are some suggestions:

Hangry: Why do I feel angry when I’m hungry?