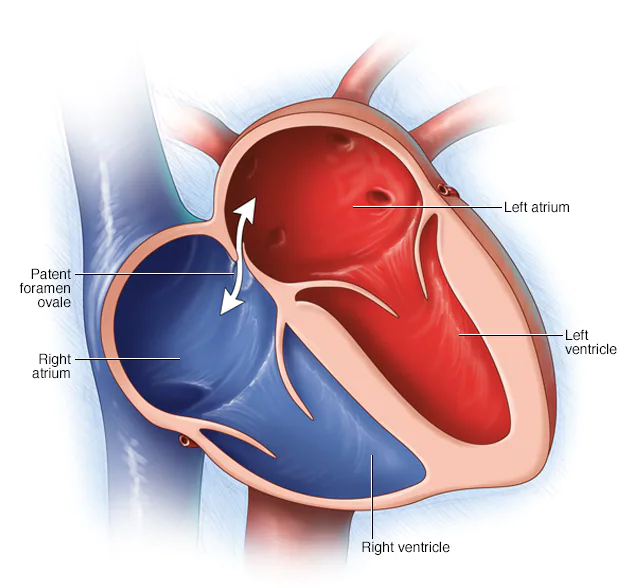 1 What is patent foramen ovale?

The foramen ovale is a normal opening between the upper two chambers (the right atrium and left atrium) of an unborn baby’s heart.

A fetus receives oxygen, not from its lungs, but from the mother’s oxygen-rich blood via the placenta. Oxygenated blood will get to the right atrium of the fetal heart, so the foramen ovale is a normal structure to shunt blood from the right atrium to the left atrium.

However, in some individuals, the foramen ovale did not close properly at birth, so there is still an opening in the septum. This is called a Patent Foramen Ovale (PFO).[0] In most cases, the hole is normally closed but can open under increased blood pressure. On echocardiography, shunting of blood may not be noted except when the patient coughs or sneezes.

About 25% of Americans have patent foramen ovale, but many do not know their condition. [1]

As mentioned, foramen ovale is a normal structure in every fetal heart. But the cause of a patent foramen ovale (PFO) is unknown. It is concerned related to two factors:

3 What are the symptoms of a patent foramen ovale?

Infants with a PFO and no other heart defects do not have symptoms. Some adults with PFOs suffer from migraine headaches. Most of the time, a PFO itself causes no symptoms. Sometimes symptoms do result from the complications of a PFO, such as stroke.

4 What are the possible complications of a patent foramen ovale?

Unless there are other defects, there are no complications from a PFO in most cases. But some people with a PFO may have other diseases. Possible complications of patent foramen ovale may include: [4]

5 How is patent foramen ovale diagnosed?

Finding out whether you have a PFO is not easy, and it’s something that isn’t usually investigated unless a patient is having symptoms like severe migraines, TIA, or stroke. Specialized testing is needed to detect a PFO. This includes: [6]

Sometimes a healthcare provider diagnoses a PFO based on tests that were needed to diagnose some other condition.

6 How is a patent foramen ovale treated?

Most PFOs need no treatment. There will be no treatments if you have no risk factors of stroke or any history of traveling blood clots. If necessary, you may need to take medication or have surgery.

If you have a PFO and have had a stroke or TIA, you may need to take medication to thin your blood to prevent blood clots and stroke.

In rare cases, your doctor may recommend closing the PFO surgically.

> Closure of the PFO with a catheter-based procedure.

> Closure of the PFO during heart surgery.

The procedure to close a PFO is simple. A catheter is used to guide a special closing device to the area of the PFO. The device expands, forming a patch that covers the hole. After the procedure, you can go home the same day or the next day. The doctor may prescribe aspirin for you to take for a few months after the procedure as a precautionary measure.

Some studies have shown that closing a PFO may relieve migraines or reduce the risk of stroke in those who have already had a stroke, but the evidence is not conclusive. You need to ask your doctor what treatment plan is best for you.

7 How to manage patent foramen ovale？

Generally, your doctor may not treat your PFO directly. Instead, he or she may suggest you do something to lower your overall risk for stroke.[8]

A Foolproof Guide to CBD Oil

Alarm! Beware of the heat stroke

View on Facebook | Share
Exercising with type 2 diabetes can be safe and beneficial, but there are a few things you need to keep in mind. 🥰Check out our latest article for complete guidelines on how to exercise safely with diabetes. https://bit.ly/3JHmNfm